374 lbs of debris removed from reef! 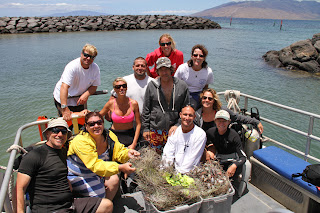 The results are in! This was by far our most successful reef cleanup in terms of how much debris was removed from the reef. This year Mike Severns Diving hosted our annual Earth Day Underwater Reef Cleanup Event, and their crew, plus the crew of Extended Horizons and a few select friends removed 374 pounds of trash and fishing tackle off the reef along the southern coast of Maui!!! 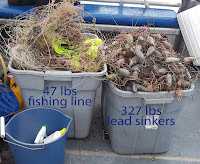 That was:
47 pounds of fishing line (monofiliment)
327 pounds of fishing tackle (lead sinkers/grabbers)
We're estimating that the size of the area of
reef we cleaned was approximately 100 sq. ft.
There was so much more to be cleaned,
but our bottom time wouldn't allow.
Each time we hold a reef cleanup we try to target areas that are commonly fished; often these areas are often along rocky cliffs. Take a look at what we're seeing underwater!

We often get the question:
'why is there so much stuff left of the reef?'
One common-sense answer is that sometimes when fishing, the fishing line breaks... however, in the areas that we clean, more often than not, the answer is that the fishing technique used is 'slide-bait fishing.'  This requires use of 'sacrificial'  lead grabbers and some monofiliment, called the 'lead line.' The combination of a cliff-like, rocky shoreline environment  +  the slide-bait fishing technique... the result is that the fishermen are unable to retrieve the debris that is intentionally left on the reef. 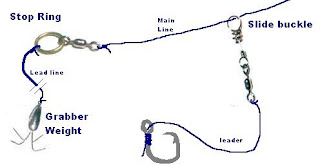 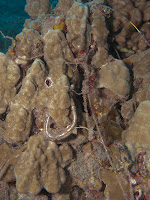 Some might ask... why continue to allow this?
From Googling "slide bait fishing" you can see that the target fish for this technique are giant trevally jacks. Here in Hawaii, fishing is a part of the culture, and the result of landing a big jack... you instantly become part of your community's legends! So disallowing something so close to the heart of the community is not a viable solution. 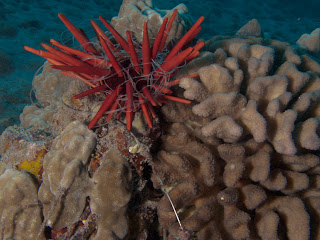 So, what can be done?
Well, at the very least... getting groups out there to clean up the rubbish is step 1. Extended Horizons hosts cleanup events each Spring and Fall, in honor of Earth Day and International Coastal Cleanup Day. I've also heard about some eco-leaning fisherman choosing to use twine instead of monofiliment as their lead line (something more organic to be left behind). But the next step is to start taking a look as a community at this issue, and see if this is something we want to see change. 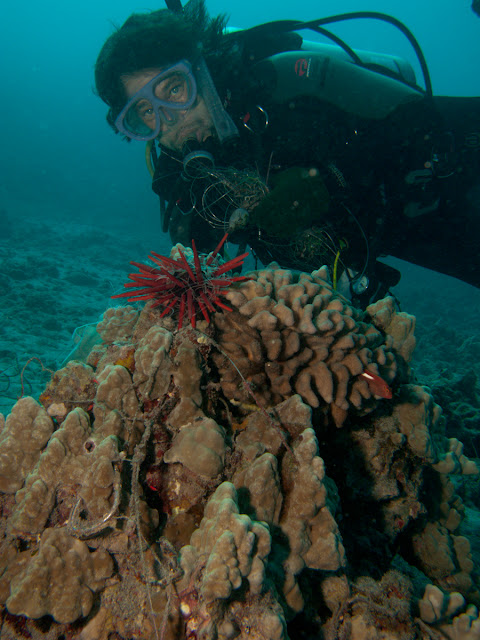 All in all... our reef cleanups are a half day, filled with lots of fun, lots of laughter, and a feel-good knowingness at the end of the day. Here is a silly video from Mike Severns Diving to show just how much good clean fun there is to be had at these events!

Welcome to our DiveBlog... many of you know that Extended Horizons participates in several Eco-Friendly business practices, such as our boat running on 100% recycled vegetable oil. But we wanted to keep you informed about our other efforts locally, and globally! We thought this blog might be a fun way of keeping you informed of upcoming events, as well as fun recent sightings and encounters we've had around Maui, Lanai and Molokai. Enjoy!

EHStaff
Lahaina, HI, United States
Extended Horizons' team consists of a small group of diver professionals, who dive for the love of diving. All of our guides are certified dive instructors and naturalists, who specialize in providing a high level of customer service. Whether you're participating in one of our scuba classes or our guided dives, you'll receive personal attention and a fun experience!